Wondering which suburbs across Perth are the most sought-after?

Home/Wondering which suburbs across Perth are the most sought-after?
Previous Next

Wondering which suburbs across Perth are the most sought-after?

It could represent the epitome of Perth’s real estate wish list.

Mount Hawthorn has once again topped the list of most-searched suburbs for sale and revealed itself as the most desired area for online searchers, according to users of Realestate.com.au. The suburb’s arsenal of features consistently sees it in the Top 10 list of most-scoured areas for sale, and not rarely in the number one spot.

So what is it about the suburb that has online searchers captivated? Experts agree the northern suburb is in a quirky geographical hub that makes it a go-to for a number of people. It not only has its own cafe strip, it is close to other booming strips, including Mount Lawley, Leederville and North Perth. It is also nearby to the Osborne Park and Innaloo shopping hubs.

On top of this, it has access to Mitchell Freeway, Lake Monger, the beach, schools, is minutes from the CBD and exudes charm as a leafy, character family enclave. 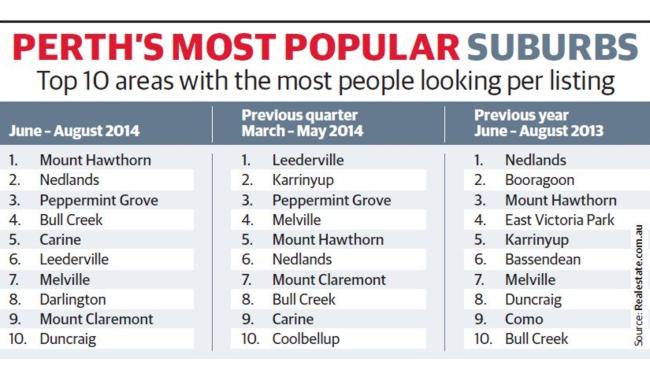 Mount Hawthorn also has property prices that are surprisingly lower per square metre than its comparative neighbours. There are currently 23 homes for sale in the suburb, ranging from $550,000 to about $1.4m.

Paul Tonich, principal of Altitude Real Estate has lived in Mount Hawthorn for many years. He said there was also a family factor at work in the area, with its generational appeal. “People are attracted to the community lifestyle and it makes them want to stay in the area,” Mr Tonich said. “My brother, parents and grandparents have all moved to Mount Hawthorn as they don’t want to be far from their friends and family.

“It is quite common for people to move to neighbouring areas to stay close to their grandchildren or children. They see the value in living here and, as most people have grown up in this area, everyone knows each other.” Mr Tonich said Mount Hawthorn had a good mix of property styles, including cottages, Californian bungalows and Federation-style homes. He said for all their character, most homes in the area were easycare or low-maintenance. “These homes represent old classics with a modern twist, and really define the diversity of this suburb,” he said.

The 2014 most-searched list has seen a number of suburbs drop off since last year. These include Como, Booragoon, East Victoria Park, Karrinyup and Bassendean. WA sales manager for realestate.com.au Emma Seal said that a position in the list was indicative of increased buyer interest in the suburb.

The other nine suburbs in the Top 10 indicate this strong demand and span the metropolitan compass point.